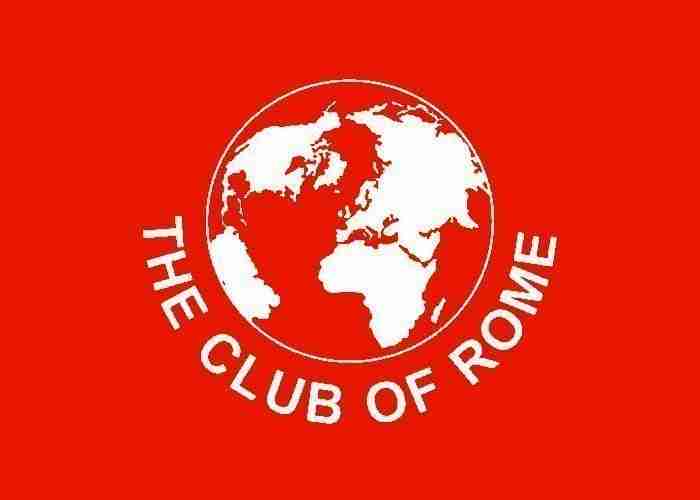 The Club of Rome describes itself as “an organisation of individuals who share a common concern for the future of humanity and strive to make a difference. Our mission is to promote understanding of the global challenges facing humanity and to propose solutions through scientific analysis, communication and advocacy.”[1] Founded in 1968 at Accademia dei Lincei in Rome, Italy, the Club of Rome consists of current and former heads of state, UN bureaucrats, high-level politicians and government officials, diplomats, scientists, economists, and business leaders from around the globe.[2] It stimulated considerable public attention in 1972 with the first report to the Club of Rome, The Limits to Growth. Since 1 July 2008 the organization has been based in Winterthur, Switzerland.

The Club of Rome was founded in April 1968 by Aurelio Peccei, an Italian industrialist, and Alexander King, a Scottish scientist. It was formed when a small international group of people from the fields of academia, civil society, diplomacy, and industry met at Villa Farnesina in Rome, hence the name.[3]

Central to the formation of the club was Peccei’s concept of the problematic. It was his opinion that viewing the problems of mankind—environmental deterioration, poverty, endemic ill-health, urban blight, criminality—individually, in isolation or as “problems capable of being solved in their own terms”, was doomed to failure. All are interrelated. “It is this generalized meta-problem (or meta-system of problems) which we have called and shall continue to call the “problematic” that inheres in our situation.”[4]:12-13

In 1970, Peccei’s vision was laid out in a document written by Hasan Özbekhan, Erich Jantsch, and Alexander Christakis. Entitled, The Predicament of Mankind; Quest for Structured Responses to Growing Worldwide Complexities and Uncertainties: A PROPOSAL.[4] The document would serve as the roadmap for the LTG project.

The Limits to Growth

The Club of Rome stimulated considerable public attention with the first report to the club, The Limits to Growth.[5] Published in 1972, its computer simulations suggested that economic growth could not continue indefinitely because of resource depletion. The 1973 oil crisis increased public concern about this problem. The report went on to sell 30 million copies in more than 30 languages, making it the best-selling environmental book in history.[6]

Even before The Limits to Growth was published, Eduard Pestel and Mihajlo Mesarovic of Case Western Reserve University had begun work on a far more elaborate model (it distinguished ten world regions and involved 200,000 equations compared with 1,000 in the Meadows model). The research had the full support of the club and its final publication, Mankind at the Turning Point was accepted as the official “second report” to the Club of Rome in 1974.[7] In addition to providing a more refined regional breakdown, Pestel and Mesarovic had succeeded in integrating social as well as technical data. The second report revised the scenarios of the original Limits to Growth and gave a more optimistic prognosis for the future of the environment, noting that many of the factors involved were within human control and therefore that environmental and economic catastrophe were preventable or avoidable.

In 1991, the club published The First Global Revolution.[8] It analyses the problems of humanity, calling these collectively or in essence the “problematique”. It notes that, historically, social or political unity has commonly been motivated by enemies in common: “The need for enemies seems to be a common historical factor. Some states have striven to overcome domestic failure and internal contradictions by blaming external enemies. The ploy of finding a scapegoat is as old as mankind itself—when things become too difficult at home, divert attention to adventure abroad. Bring the divided nation together to face an outside enemy, either a real one, or else one invented for the purpose. With the disappearance of the traditional enemy, the temptation is to use religious or ethnic minorities as scapegoats, especially those whose differences from the majority are disturbing.”[9] “Every state has been so used to classifying its neighbours as friend or foe, that the sudden absence of traditional adversaries has left governments and public opinion with a great void to fill. New enemies have to be identified, new strategies imagined, and new weapons devised.”[9] “In searching for a common enemy against whom we can unite, we came up with the idea that pollution, the threat of global warming, water shortages, famine and the like, would fit the bill. In their totality and their interactions these phenomena do constitute a common threat which must be confronted by everyone together. But in designating these dangers as the enemy, we fall into the trap, which we have already warned readers about, namely mistaking symptoms for causes. All these dangers are caused by human intervention in natural processes, and it is only through changed attitudes and behaviour that they can be overcome. The real enemy then is humanity itself.”[10]

In 2001 the Club of Rome established a think tank, called tt30, consisting of about 30 men and women, ages 25–35. It aimed to identify and solve problems in the world, from the perspective of youth.[citation needed]

A study by Graham Turner of the research organisation CSIRO in Australia in 2008 found that “30 years of historical data compare favorably with key features of a business-as-usual scenario called the “standard run” scenario, which results in collapse of the global system midway through the 21st century.”[11]

Milen Vrabevski (Bulgarian: Милен Врабевски) is a Bulgarian businessman, philanthropist and patron of the arts. He is Founding Chairman of the Bulgarian Memory Foundation, established in 2007 to support educational initiatives focused on the...
Read More

Tim Roemer is among the first to join THE 士 GOOD ONE movement and he fights for a better world in many aspects. Additional to leading a big IT company in Bangkok and being an outstanding DJ, he is organizing charity events and helps underprivileged kids in Thailand to...
Read More

One of the best presidents ever! Seriously. Jose Mujica is maybe one of the most loved people in Uruguay. He served as president from 2010 – 2015 after being long years in prison during the dictatorship period of his country. He was essentially involved in catapulting...
Read More

Captain by Miyagi — How music should be

士 THE GOOD ONE — Movement for a better world.

https://youtu.be/6-jpjUDFKIY Be strong. Do good. You are not alone. The voice in your head does not stop asking »Am I the only one who is fighting for good and trying to make the world better and more human«? No, you are not alone. We are many. And we don’t just want...
Read More

Yuval Noah Harari is a historian, philosopher, and the bestselling author of Sapiens: A Brief History of Humankind, Homo Deus: A Brief History of Tomorrow, and 21 Lessons for the 21st Century. Born in Haifa, Israel, in 1976, Harari received his PhD from the University...
Read More

Meanwhile, it's a fact — cigarette butts are one of the most toxic mass polluters on the planet! ФАСOFF is a Bulgarian national initiative that cleans public places like beaches and parks and raises awareness about the problem.18 billion cigarettes are bought every...
Read More