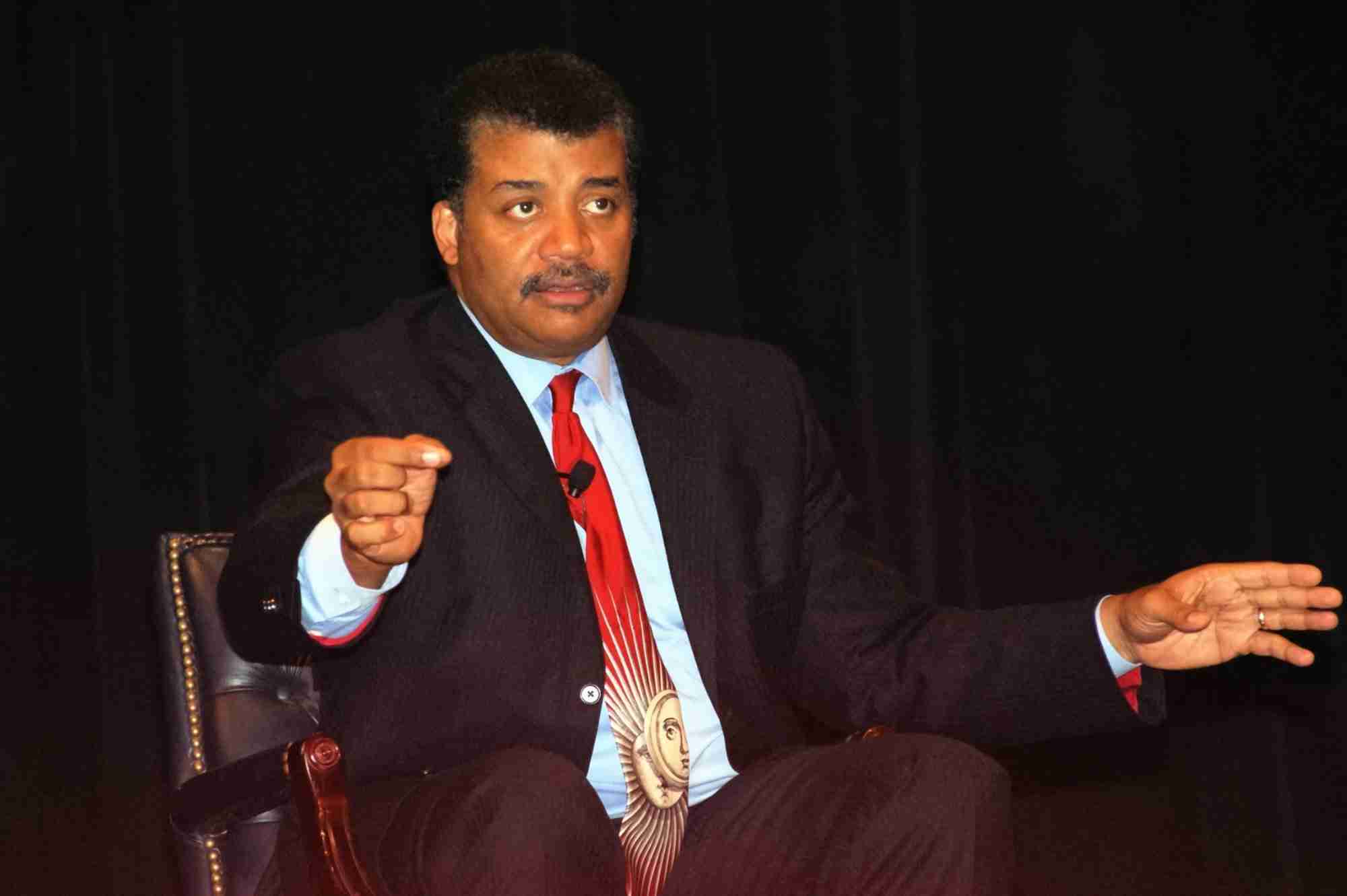 Neil deGrasse Tyson (/dəˈɡræs/; born October 5, 1958) is an American astrophysicist, author, and science communicator. Since 1996, he has been the Frederick P. Rose Director of the Hayden Planetarium at the Rose Center for Earth and Space in New York City. The center is part of the American Museum of Natural History, where Tyson founded the Department of Astrophysics in 1997 and has been a research associate in the department since 2003.

Tyson studied at Harvard University, the University of Texas at Austin and Columbia University. From 1991 to 1994 he was a postdoctoral research associate at Princeton University. In 1994, he joined the Hayden Planetarium as a staff scientist and the Princeton faculty as a visiting research scientist and lecturer. In 1996, he became director of the planetarium and oversaw its $210 million reconstruction project, which was completed in 2000.

From 1995 to 2005, Tyson wrote monthly essays in the “Universe” column for Natural History magazine, some of which were later published in his books Death by Black Hole (2007) and Astrophysics for People in a Hurry (2017). During the same period, he wrote a monthly column in StarDatemagazine, answering questions about the universe under the pen name “Merlin”. Material from the column appeared in his books Merlin’s Tour of the Universe (1998) and Just Visiting This Planet (1998). Tyson served on a 2001 government commission on the future of the U.S. aerospace industry, and on the 2004 Moon, Mars and Beyond commission. He was awarded the NASA Distinguished Public Service Medal in the same year. From 2006 to 2011, he hosted the television show NOVA ScienceNow on PBS. Since 2009, Tyson has hosted the weekly podcast StarTalk. A spin-off, also called StarTalk, began airing on National Geographic in 2015. In 2014, he hosted the television series Cosmos: A Spacetime Odyssey, a successor to Carl Sagan‘s 1980 series Cosmos: A Personal Voyage.[1] The U.S. National Academy of Sciences awarded Tyson the Public Welfare Medal in 2015 for his “extraordinary role in exciting the public about the wonders of science.”[2]

The healthy man does not torture others —generally, it is the tortured who turn into torturers.

The healthy man does not torture others — generally, it is the tortured who turn into torturers.Carl Gustav Jung
Read More

The NGO "Circular Economy Society" was founded to raise awareness for the need for a new economy that values not only the growth of money but cherishes our nature and our everyday resources as well. Together with 士 THE GOOD ONE movement we advocate for banning...
Read More

The World's Personality To know your own real personality is the first step to improve yourself. One of the world's best sites to do so is 16personalities.com, deriving from the sixteen modern psychological human patterns. The site also publishes their results and...
Read More

No one can make you feel inferior without your consent. — 士 Eleanor Roosevelt

No one can make you feel inferior without your consent. — 士 Eleanor Roosevelt
Read More

Carl Ludwig and Jesse Owens — When Friendship Wins The Race

Much has been documented on this remarkable friendship between Carl Ludwig and Jesse Owens during the Olympic Games 1936 in Nazi-Germany. But here is yet one more post about the exemplary sportsmanship of both athletes. Ludwig was the dream model for German race...
Read More

Dave Hakkens is a pioneer in plastic recycling. His project Precious Plastic is a great solution on how to recycle plastic locally in your community. All technology is completely open source and empowers people to connect and set up a full process including the...
Read More

IF ONE MAN CAN DESTROY EVERYTHING, WHY CAN’T ONE GIRL CHANGE IT?

IF ONE MAN CAN DESTROY EVERYTHING, WHY CAN’T ONE GIRL CHANGE IT?— Malala Yousafzai
Read More

https://youtu.be/K2T0Xd70SGM Two friends that came to see the decline in our environment; arousing a profound need to reevaluate their lives after watching a series of films pointing at the leading causes of climate change. Now, they aim to establish a connection...
Read More

Piñatex is a natural leather alternative made from cellulose fibres extracted from pineapple leaves, Piñatex was developed by Dr. Carmen Hijosa and first presented at the PhD graduate exhibition at the Royal College of Art, London. Piñatex manufactured and distributed...
Read More